Football these days can sometimes seem like a joke. Just look at the stupid amount of money that is pumped in, the unnecessary diving, or the hire and fire culture of the managers.

The number of managers that are given the job and then sacked, sometimes within the same season, is ridiculous. It makes it incredibly hard to get any kind of momentum as a team these days, meaning results are generally less convincing and owners are more likely to get rid of the managers in charge. It’s a vicious circle that never seems to end.

Look at the brilliant Leicester City story. It’s a prime example. The Foxes, being huge underdogs at odds of 5,000 – 1 to win the title, put on a fairytale season that finished with them as the Premier League Champions. Certainly a once in a lifetime event for the club and the then manager, Claudio Ranieri. However, just nine months after leading Leicester to the title, Ranieri was sacked by the clubs’ owners. You can argue that Leicester’s title defence wasn’t going how the Thai owners were hoping. Leicester were only one point above the relegation zone. However, it was still a ruthless decision to get rid of Ranieri. Ranieri found himself back on the manager merry go round, and is now manager at FC Nantes.

Craig Shakespeare took over from Ranieri as caretaker manager with thirteen matches left to play in the season. He was tasked with making sure Leciester stayed in the Premier League, and he did that successfully. Shakespeare was later offered a three year contract to stay on as permanent manager. Ten games after signing the contract, he was sacked, with Leicester City in the relegation zone. Michael Appleton has since taken over as caretaker manager. Let’s hope he doesn’t arrive at the same fate if he’s given the permanent role.

The Leicester City owners will now be looking for yet another permanent manager and the betting odds are favouring Manuel Pellegrini, Chris Coleman or Claude Puel.

Here are the latest odds for the three favourites from Bet365: 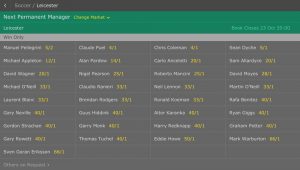 Whoever gets the nod at Leicester will know that they need results immediately. If not they’ll be out the door and back onto the manager merry go round before they’ve even walked in.

When did this Start?

This mindset of continually changing the manager when the teams are not performing has been around for quite a while. In the 13/14 season, 11 managers lost their jobs. This is still the record number of sackings in a season. However you can see the trend is not just a modern day thing as the season with the second highest number of sackings was the 94/95 season, with 8 managers fired.

Clubs hire and fire as they see fit, and they always have done. When the results have been poor the manager is almost always found to be at fault. Of course, there is a lot more money and publicity in the sport now. Therefore the sackings are usually high profile affairs and we hear much more about them.

Managers that have been sacked the most?

You might be surprised to find out that Claudio Ranieri is one of the most sacked managers of top flight teams. He has been sacked a total of seven times in his career; Chelsea, Valencia, Juventus, Inter Milan, Monaco, Greece and Leicester.

Graeme Souness, who’s often slated as the worst manager of all time, has been sacked from a managerial position a total of 8 times. Souness had poor relationships with many of his players leading to a lack of trust, confidence and success. Souness also had his fair share of bad luck, undergoing a triple heart by-pass whilst managing Liverpool.

Often the manager is not affected by being sacked. It is a volatile market and when a manager is sacked they are almost immediately offered a job at another club. That is why it’s called the manager merry go round. The managers swap clubs almost every year. Similarly, the managers usually sign multiple year contracts, so if they get sacked before the contract is finished then they get a huge pay off. These severance fees have been known to be in excess of £10 million. All in all, getting sacked works out particularly well for the managers wallet.

Which team has had the most managers?

Thanks to this manager merry go round there are a lot of current Premier League teams that have had their fair share of managers. However, none of them can match Crystal Palace. They’ve gone through 18 mangers in 21 years. That’s a stupid amount. No wonder they’re currently sitting right at the bottom of the Premier League table.

Does Changing the Manager Frequently Work?

Common sense says the mindset of continually changing the manager does not work and this is generally backed up by results. The team have no fluidity and routine set, before they have to change their methods and get accustomed to a new manager. Stability breeds success, and there is vast amounts of evidence to support that.

It also costs a lot for the team. Managers usually sign long contracts in which they’ll receive a huge payout if they are sacked before the end of their time. It’s very rare these days for a football manager to leave on their own terms. Sir Alex Ferguson is one of the only managers to leave the game on his own terms without the team pushing him out. It’s a sad inditement on football.

The bookies use the manager merry go round to their advantage. They create a large number of markets their customers can bet on.

The odds for the first manager to leave are shown in full here, the most likely is Slaven Bilić, the current manager at West Ham United. There have been rumours that he is about to be sacked and replaced by Julian Nagelsmann. Many of the supporters have been calling for his head, and it looks like they’re about to get what they want. The odds for Bilić to get the sack before any other manager leaves are 1.80 (4/5)  at SkyBet.

The second most likely manager to leave his post is Sean Dyche, the current manager of Burnley. Recently he has been linked with a move to Everton after they sacked their manager Ronald Koeman due to a poor run of results. The odds for Dyche to leave first are 2.88 (15/8).

There are obviously latest odds for the new Leicester manager, which we mentioned above, with Manuel Pellegrini the bookies favourite.

There are many betting markets related to football managers. This is due to the high volatility and hire/fire culture of the manager merry go round. Here are a few of these markets: Next Permanent Everton Manager, Next Permanent England Women’s Manager and Next Permanent Arsenal Manager. The odds for these markets at SkyBet are available here.

The Manager Merry Go Round and Matched Betting

Overall, this means more markets for us matched bettors to place our back and lay bets ultimately allowing us to make more money online. If you’re not sure what matched betting is you can find out more in our complete guide.

That’s it for this article. I hope you enjoyed reading it.

Please add any thoughts in the comments below.