The men’s Jamaican bobsleigh team of 1988 were massive underdogs at the Olympics. Most people wrote them off saying that a tropical country like Jamaica could never compete in the winter games. And they had a point!

The team trained on concrete, grass and a frozen lake! Not exactly the usual training methods. However, they started with one vision to ‘make it to the winter games’.

Devon Harris, one of the original members of the 1988 bobsleigh team said ‘I remember saying to myself, nobody could ever get me to go on one of those things.’ However, after beating all the odds, the team made it to the 1988 Olympic Games in Calgary, Canada.

The team didn’t do too well and in their last run, they span out of control and crashed out at 85mph. They were disqualified from the competition but this didn’t affect them. They’d made it this far, they weren’t going to stop.

Each team member, emotionally and physically drained, got out of the sled and walked to the finish line, receiving huge respect from the crowd and media.

Their achievement caught the imagination of thousands and led to the 1993 Disney hit Cool Runnings. 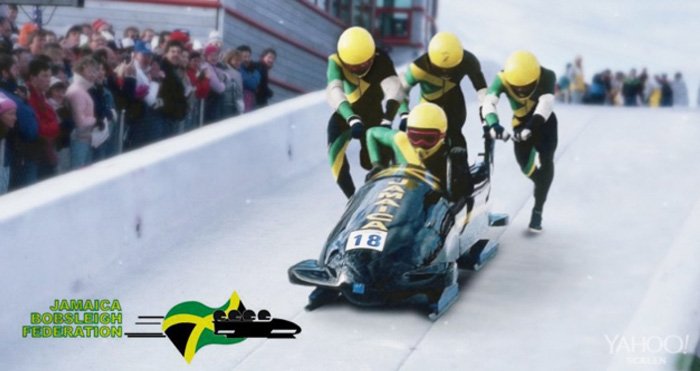 The 1993 Disney film, Cool Runnings brought this unlikely story alive and made many realise how great a success it was to get to the Olympic Games.

Nowadays, whenever someone mentions ‘bobsleigh’ we all immediately think of the film and specifically the Jamaican team.

Move on 30 years and the women have achieved the same feat. They’ve qualified for the double bobsleigh event at the Pyeongchang Winter Games. Unfortunately, the men’s team didn’t quite make the cut. We’ll have to wait another four years before the two teams could potentially compete in the same games. Judging by the countries spirit, I wouldn’t put this past the Jamaicans.

Chris Stokes, one of the 1988 men’s team, was drafted into the 1988 Jamaican team with three days spare. Talking about the women’s team he said ‘Jamaica bobsled is about overcoming incredible odds. What they see in us is themselves. They’re going, if they can do that, we can do that.’

The driver, Jazmine Fenlator-Victorian, is no stranger to the bobsleigh. She competed in the 2014 Winter Games in Sochi with the American team. She partners up with Carrie Russell, a sprinter in her own right.

Only a few weeks ago had they qualified for the 2018 Olympic Games and a sled they’ve named Cool Bolt. A salute to the brilliant film Cool Runnings and Usain Bolt, the outstanding Jamaican sprinter.

‘A lot of people know of bobsleigh because of the movie ‘Cool Runnings’ and Jamaica making that launch in 1988 and really pushing bobsleigh with their popularity, but we’re also humbled and honoured to be compared to those men that started and fought so hard to represent Jamaica.’

Though the backgrounds are slightly different and the women have probably had better access to training facilities and funding, it’s still an incredible achievement for a tropical country like Jamaica to compete in the Winter Games.

Hats off to the Jamaicans!