With football, the most watched sport in the world, football shirt sponsorship is a huge industry. It’s a brilliant chance for companies to advertise their products to an enormous amount of people. It’s no surprise that betting companies are one of the most prevalent sponsors on football shirts.

Football and betting go hand in hand. After horse racing, football is the second most popular sport to bet on in the UK. Therefore, betting and football are a synonymous match. Through linking with football, betting companies are sitting right in front of their potential customers.

Ever since the Labour Government passed the 2005 Gambling Act, betting companies have relished in unlimited advertising. Specifically, companies based in the UK and offshore were free to advertise on TV. This meant the bookies increased their marketing spends considerably. According to Ofcom, industry advertising grew by 1,400% between 2005 and 2012.

These days, you can’t watch a football game without being shown the latest offers from the bookies. Whether that’s Ray Winstone from Bet365, Chris Kamara from Ladbrokes or one of the bookies sponsoring the teams.

In all fairness Bet365 and Ladbrokes have both hit the jackpot in terms of TV advertising. You immediately recognise these brands, which is the sole aim of their marketing. They have stolen the market and practicaly wiped the floor with them.

Overall, football is one of the most lucrative markets to advertise for online betting companies thanks to the huge exposure the sport receives. No other sport has the same attraction on a global scale.

As you can imagine, this exposure doesn’t come cheap. Some betting companies spend millions of pounds each year to advertise with the football teams.

Football shirt sponsorship has become one of the most popular advertising mediums in the industry. It’s not just betting companies that use this method but that’s who we’ll concentrate on in this article.

The first betting company to sponsor a football team on a shirt was Betfair when they sponsored Fulham in the 02/03 season. Whilst the online betting industry has changed significantly since then, many of the principals still remain the same.

In the current 17/18 Premier League season 8 out of the 20 teams are sponsored by betting companies. This has dropped slightly from last years figure of 10, however, it’s still a very high at 40% of the marketing available. 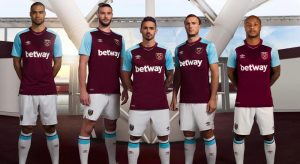 What’s interesting is that none of the top teams in the Premier League, like Man Utd, Chelsea, Tottenham etc. are sponsored by the betting companies. Initially, I wasn’t sure why. But after some research we’ve found out it’s down to cost.

The top teams are asking for as much as £20 million for a shirt sponsorship deal, whereas the second tier teams; Everton, Swansea, Newcastle etc. charge a relatively small £1 million. I know, still a lot of money, but considerably less than the top teams. The betting companies have to make a compromise between how much they want to spend and how much exposure they want. None of the betting companies see sponsoring the top tier teams as a viable investment at the moment.

So, which betting companies sponsor which clubs in the 17/18 Premier League season?

There will only be a few bookies that you recognise on that list above. A number of the companies are foreign, showing the huge amount of publicity the Premier League gets across the world.

It’s not just football shirts that bookies use to advertise their products. Most stadiums have digital bill boards, around the edge of the pitch, that show different adverts. Gone are the days where one company’s advert would be plastered onto a bill board. New digital boards can show a range of different adverts through the match increasing their revenue potential and making it more enticing to look at.

Much like football shirt sponsorship, it’s a win win for the advertisers. They have all the exposure from supporters within the stadium but also the vast number of people that are watching from home.

As a country with the most popular football league in the world, we can’t seem to get away from the bookies. They always find a way to get in front of our faces. Whether you think the bookies dominate football is a personal opinion. I know I certainly get bored of watching the ‘In Play With Ray’ advert time and time again during a Saturday afternoon of football.

At the same time I can’t complain. The more promotions and offers the bookies hand out, the more we can make from matched betting.

Bookmaker advertising helps us with our matched betting. The more the betting companies can promote their latest offers, the more money we can make using back and lay betting. This method involves no risk and we are guaranteed to make a profit no matter the outcome of our bets.

Match betting is definitely the best way to make money online and with our expert knowledge you’ll be a pro in no time. If you’re new to matched betting and would like to find out more, head to the ‘Learn More’ section at the top of this page.

That’s it for today. I hope you enjoyed this article on football shirt sponsorship and how it benefits the matched bettor in us!