So, what do these lines tell us?

Alternatively, an even better way to think about payouts is that for the underdog, you win your bet multiplied by the line. So a $17 bet on Hughes wins $17 x 1.9 = $32.3 plus your stake.

The lines also tell us something far more important which is the percentage chance each fighter has of winning.

To determine the chance of each fighter, the calculation is as follows: Your stake divided by the potential winnings plus your stake.

For the lines above, the calculation would look like this:

Astute readers may notice these numbers add up to more than 100%.

I will spare you the calculation, however the reason is that it ensures the bookie can make a profit regardless of who wins. For our purposes however, all that is important is that we are able to translate betting lines into percentages.

The key to long term success in gambling on MMA or any other sport is being able to consistently identify when these lines are off. 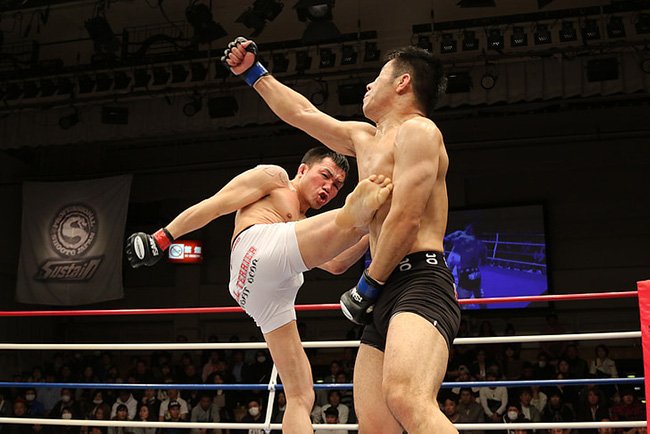 More specifically, if you believe the actual chance of a fighter winning is significantly higher than the chance that is being assigned by the bookies, then you should place a bet. This is what is meant by finding value in the lines.

Furthermore, the size of your bet should generally correspond to this difference. The more off the bookie and betting public are, the more value there is in the line.

Assuming you are actually confident in your ability to correctly determine each fighter’s actual chance of winning a given fight, more value should correspond to a willingness to place a larger bet.

Notions that one should only bet on underdogs or only bet on favourites are nonsense. All that matters is value. When a fight is announced, you need to ask yourself what each fighter’s chance of winning is.

Once the line is released you should bet accordingly. Not everyone who bet on Matt Serra against St. Pierre at UFC 69 actually thought Serra was going to win.

Conversely, just because you feel confident that a certain fighter is going to win does not mean you should be willing to put money on that fighter at any price.

Recall that I advise you should bet when your own prediction as to what an actual fighter’s chance of winning is greater than what the bookie assigns. However, the tricky bit is working out what point you bet at. Should it be 2%, 5% or even 10%?

Ultimately, this depends on your own level of risk aversion.

This is why for most punters it’s not recommended that you bet heavy on favourites. A -1000 line on St. Pierre corresponds to a ~91% chance of him winning. Even if you felt 95% confident that St. Pierre was going to win, for many risk adverse bettors this would not correspond to enough value to justify a bet. Especially in MMA, it is very rare that anything is that big of a lock.

Here are a few basic, but crucial tips you should follow for finding value in UFC lines.

There is no bigger cardinal sin in betting than putting money on or against someone you’ve never seen fight or know nothing about.

This is because it is going to be nearly impossible for you to form an opinion about each fighter’s actual chance of winning, and therefore impossible to identify value.

Often what happens is that a fighter will be hyped up, and based on the hype alone he will be the favourite regardless of how much information exists on his opponent.

A recent example of this would be Gerald Harris vs Maiquel Falcao at UFC 123. The people betting on Harris were effectively buying into his hype, and most betting on Falcao were doing so less because they knew a lot about him, but more because they thought Harris was becoming too big of a favourite against an unknown commodity.

As it turned out, those betting on Falcao happened to be right, however I would argue that both sides exposed themselves to unnecessary risk.

As a small caveat, I would say that massive underdogs have historically done better than their odds would suggest, and that the only exception to betting on a fighter you’ve never seen would be on a massive underdog that there is very little information on. (ie: Pierce vs Larson, Sokoudjou vs Nogueira, Alexander vs Jardine)

Tip 2: Results are important, but not everything

After one fighter beats another, the wrong conclusion to make is “Since fighter A beat fighter B, fighter A is better than fighter B”. There is not perfect parity in MMA results, and you can look to anyone who bet big on Marquardt against Sonnen, or bet big on Stout against Stephens for victims of this fallacy.

Instead, you have to ask yourself why fighter A beat fighter B. Besides demonstrating himself to be the better fighter on the night, he has probably demonstrated superiority in at least one discipline: submissions, wrestling, or striking.

The outcome of the Pearson/Fisher fight should have been rather obvious to anyone who had watched the first two aforementioned fights considering it was likely to take place in the standup realm.

The final reason why results should not be stressed is because the winning fighter may not have necessarily displayed himself to be the superior fighter at all.

One obvious example of this is with poor judging. While Leonard Garcia may have the win on paper, most feel that Nam Phan would win in a rematch, and hence Phan is the favourite in that fight.

Another example of results not being too important relates to quick finishes. Maciej Jewtuszko recently upset Anthony Njokuani, however no information could actually be derived from that fight regarding their relative skill sets.

Tip 3: Ask yourself how either fighter wins

I would argue that this should be the heart of your analysis before placing a bet. When a fight is announced, most individuals quickly make a prediction about what they believe is going to happen, and are often way too confident in this prediction.

If you don’t believe me, check out the forums regarding the Shogun vs Jon Jones fight. Instead, you need to ask yourself how either fighter wins, and how likely you think each outcome is.

While I hate to do this in retrospect because hindsight is 20/20, a perfect example of this is in relation to the Dennis Siver vs George Sotiropoulos fight. Sotiropoulos was on a big winning streak and fighting in his hometown.

It was supposed to be a formality that he would find a way to take Siver down and submit him. Analysing the matchup in retrospect however, a Siver win was perfectly conceivable. Sotiropoulos had shown relatively poor striking and wrestling in the past, and Siver was certainly the superior striker.

The -380 line really made no sense from a rational point of view, but it was justified by the idea that Sotiropoulos was supposed to win.

I ask that you do not fall into this trap. There are no guarantees in this sport, and no fighter is ever a 100% lock. When you are putting your money against a fighter, it is very important that you exhaust all the possible ways that fighter wins the fight, and why you are confident that those outcomes are less likely than the odds suggest.